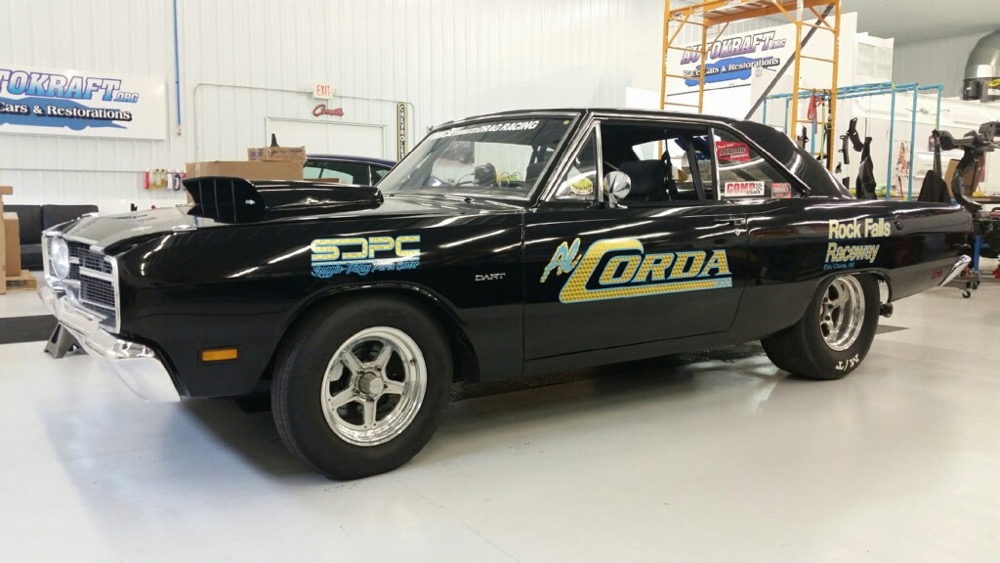 It's been a few years since Al Corda has competed in and collected timeslips in his beautiful black 69 Dart, but after deciding he wanted to climb back into its driver's seat, he began making arrangements to ready it for its return to the race track. He delivered its 440 cubic-inch Chrysler engine, which is topped with Indy Cylinder Heads EZ heads and two four-barrel Edelbrock carburetors, to Wheeler Engines in Blaine, Minnesota, where it was freshened and finessed to take it to 500 cubic-inches, and that's a move which Corda is confident will take him from the 10.00 index to the 9.75 index of NMCA's ATI Nostalgia Super Stock category. With his engine primed for pavement-pounding, he needed his car to be primed for pavement-pounding, too, so he delivered it to AutoKraft Race Cars and Restoration in Eau Claire, Wisconsin, where fellow racer Kurt Anderson installed new AFCO front shocks as well as wheelie bars to keep the car's launch in check. Anderson, who also had upgraded the rollcage on the car some time ago, also outfitted it with a new set of Mickey Thompson 10.5 slicks. Kurt is a real craftsman, and honestly, there's nothing he can't do, said Corda, a two-time NHRA champion, multi-time NMCA event winner and former owner of Rock Falls Raceway in Eau Claire, Wisconsin. Now, Corda has his sights set on taking part in the 15th Annual Quick Fuel Technology NMCA Bluegrass Nationals, featuring the Dave Duell Nostalgia Super Stock Classic, May 12-15, 2016, at Beech Bend Raceway, in Bowling Green, Kentucky. He'll also run his 2000 Firebird in the Chevrolet Performance Challenge Series LME Street King class in 2016, and will soon'debut a Scoggin-Dickey COPO Camaro. While he's teasing us now with only a glimpse of the red COPO Camaro, he'll share more information about the car as it nears completion for NMCA's Website.