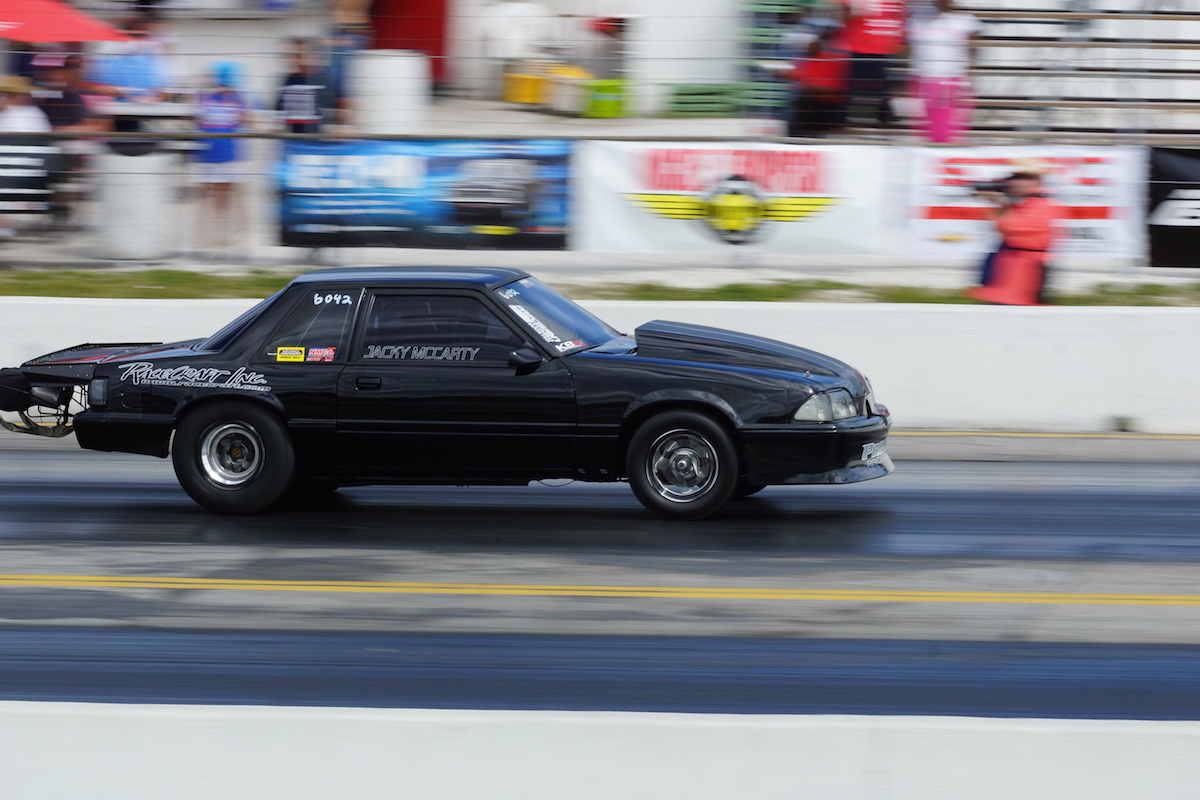 The one and only Jacky McCarty of McCarty Performance has officially introduced himself and his sinister black Fox body Mustang to Wiseco Street Outlaw. The car is majorly motivated by a ProLine-built 400 cubic-inch small-block Chevy and a 94mm turbo, and the transfer of all of the power to the pavement is handled by an M&M Transmission-built Turbo 400. Josh Lindsey tunes it up with a FuelTech engine management system, and he's on his game this weekend, as McCarty is sitting in the third qualified spot going into today's first round of eliminations after ripping off a 4.51 and 163 mph. This is our first race with the NMCA, and we like it, said McCarty, of Bristol, Virginia, a regular in X275 ranks across the country. We like the structure and the organization. We'll be back. Quick Lane at Downs Ford NA 10.5 driver Don Bowles has been finessing the tune on his chassis and his Oakley Motorsports-built 2015 390 cubic-inch FR9 Ford engine - which is now fed via a Holley HP EFI system - to get a clean hit on the track this weekend. He pulled some power out in early testing and qualifying, but put it back in before last night's final round of qualifying, when outdoor and track temperatures were cooler, and promptly put his Fox body Mustang on the wheelie bar. After a quick pedal, he settled into the third qualified spot with an 8.13 and 167 mph. Edelbrock Xtreme Street driver Ray Cox saved the best for last yesterday, as the 8.11 he laid down in the final round of qualifying replaced his previous best of 8.19. There were, however, no happy dances on the return road. I just plain got lucky, because the change I was going to make right before that run would have actually made the car run slower, so while I'm happy about the new personal best, I'm disappointed in myself, said Cox, who's qualified ninth and is set to face number two qualifier Henry Lee in today's first round of eliminations. He and his crew, including his son, Brad Cox, have been chasing electrical gremlins, but he's hopeful they'll have them licked before it's time to pull up to the line in his Trans Am, which features a nitrous-assisted 535 cubic-inch Pontiac engine which he built based on a BES design, as well as an RPM Transmissions-built Turbo 400. Fresh off a win in NMRA VP Racing Fuels Street Outlaw at this track last weekend - and being the first to achieve 4.30s in the category with a 4.39 - driver Dwayne Barbaree and car-owner Russell Stone put their mighty Mustang in the fourth qualified spot in NMCA Wiseco Street Outlaw this weekend with a 4.52 and 161 mph. That's proof that their new Precision turbo-fronted Kuntz and Company 400 cubic-inch small-block Ford, M&M Transmission-built three-speed Turbo 400 are happy, healthy and working in harmony. They've been dealing with some fluctuating converter fluid temperatures this weekend, but as always, they appear to be optimistic. If we get that sorted out, I'm going to stand on it and see what it does, said the ever-charismatic and comedic Barbaree. It's just like the great Rickie Bobby. If you're not first, you're last. Right While Edelbrock Xtreme Street standout Bill Trovato has a reputation for sticking with the tried and true, he recently made the move from slicks to Mickey Thompson 275 drag radials, and as a result, he moved from a best of 1.21 to a 1.17 in the 60-foot and from a best of 7.77 to a 7.72 in the quarter-mile. The drag radials are faster for me from the 60-foot through the quarter-mile, said a smiling Trovato, who has no complaints about having had to adjust the shocks and four-link under his 5th Gen Camaro and how much power he lays down at specific areas on the track via his BTR-built 440 LS engine and Proformance Racing Transmissions-built Powerglide. Trovato, who consulted with fellow driver Frank Mewshaw about the changes in advance, is assisted this weekend by David Mitchell, John Costello and Matt Trau, and sits in the third qualified spot going into today's first round of eliminations. Reigning ARP Nitrous Pro Street champion Joey Bucaro is picking up where he left off by qualifying in the top spot with a 7.34 and 186 mph in his 04 Mustang at his first race of the season. He reports that his nitrous-enhanced 430 cubic-inch small-block Ford engine was freshened by Zapp Racing Engines, and underwent what he'll only refer to as minor changes to help him 'stay on top of the game as he tries to back up his 2015 championship. In today's first round of eliminations, the longtime driver will square off against John Trobiani, who qualified with an off-pace 8.15 and 129 mph in is '68 Camaro. While reigning Detroit TrueTrac Nostalgia Muscle Car champion Andy Warren's '71 Caprice is receiving upgrades, he's piloting an 82 Malibu wagon owned by Chip Rollins this weekend. The cool classic boasts a 396 cubic-inch small-block Chevy, and leave it to Warren to cruise it to an 11.07 on his 11.00 in qualifying and win first and second rounds. "It should be interesting," said the ever-calm Warren, who's awaiting his semifinal matchup. Some may recall that Warren also piloted a '71 Nova for Rollins son, Jason Rollins, back in 2013. He may have had some time off last season, but Edelbrock Xtreme Street driver Eric Kenward is back in action and rolling like a freight train. He backed his popular Malibu wagon out of his trailer to reveal a new Ultra Carbon carbon fiber hood and front end, as well as a custom Synergy Green paintjob by Bob's Custom Paint, and when everyone was done admiring it there, he took it to the starting line and laid down a 7.67 at 176 mph to qualify in the top spot. He then backed it up with a 7.65 at 175 in his first-round bye-run, which is the unofficial class record. Much of the muscle comes from the T nT Race Engines-built 365 cubic-inch small-block Chevy motivated by a 76mm Garrett turbo by Forced Inductions, for which Chiseled Performance fabricated a custom intercooler. An FTI Powerglide and PTC bolt-together converter lurk below the surface of the car which rolls on TRZ suspension and Holeshot wheels wrapped around Mickey Thompson 275 drag radials. Kenward is supported in the tuning department by Cal Hartline, and in the pit area by his wife, Lori Kenward, his brother, Dean Kenward, Robert Rodgers and Daniel "The Bus Driver" Knapp, who's the crew chief. "It's a miracle how all of this has come together," said Kenward. "Now, I'm going to run all six races, and go for the championship." In the second round of today's VP Racing Fuels Xtreme Pro Mod eliminations moments ago, Chris Rini's Camaro impacted the wall. While he is conscious, he is being taken by a medical helicopter to an area hospital to be evaluated. Our thoughts are with our longtime friend. The road from his home in Indiana to this race in Florida wasn't exactly a smooth one for 2015 Edelbrock Xtreme Street champion David Hutnick, as his motorhome broke down - in multiple states - on the way. But he managed to put that behind him and focus on the task at hand, and . qualified fourth with a 7.73 and 180 mph in his Straightine Performance-built 02 Camaro which features a BTR big-block Chevy and Edelbrock nitrous system. He's been advancing through the rounds, just defeated top qualifier Eric Kenward in the semifinal and will face Martin Connelley and his Fox body Mustang in the final. Making that sweeter is the fact that he's on Mickey Thompson 275 drag radials rather than slicks for the first time in competition, and is working wih his crew, including Kevin Stevens, of Straightline Performance, to dial in the car.I've tested on radials, but I've never competed on them, said Hutnick. "I'm committed to getting used to them and running them through the season. Among the many exciting final rounds here this weekend was the one that just occurred in Mickey Thompson Radial Wars featuring Daniel Pharris and his 95 Mustang and DeWayne Mills and his 68 Camaro. Pharris was off the line first to grab the holeshot win with a 3.99 at 198 mph over Mills and his 3.97 at 202 mph. This is the quickest side-by-side run in Mickey Thompson Radial Wars history.