It's Super Bowl Sunday here at Route 66 Raceway in Joliet, Illinois, as racers will be competing for NMCA class wins and the subsequent winners will square off against the NMRA class winners for a chance to grab a Nitto Tire Diamond Tree Super Bowl ring and hopefully bring home the team win for the NMCA.

Joining the Holley EFI Factory Super Car ranks this weekend is Jordan Pennington of Mishawaka, Indiana. The Pennington family is actually fielding three cars this weekend, with Jordan's mother Julie competing with her '69 Corvette in National Parts Depot's F.A.S.T. class and father Terry's 1969 Camaro running in the same with friend Ed Keim behind the wheel. Jordan drove the COPO Camaro around Randy Eakins in the first round of Factory Super Car last night, 8.58 to 8.78 and will face Gardner Stone in the second round today.

There's always something going on in the pits after the on-track action stops, and Mark Menscer of Menscer Motorsports was busy servicing customers long into the evening. Menscer has his mobile service center here this weekend as he has a huge amount of customers racing at Route 66 Raceway, not to mention the Super Bowl is a good opportunity to bring in some new business. 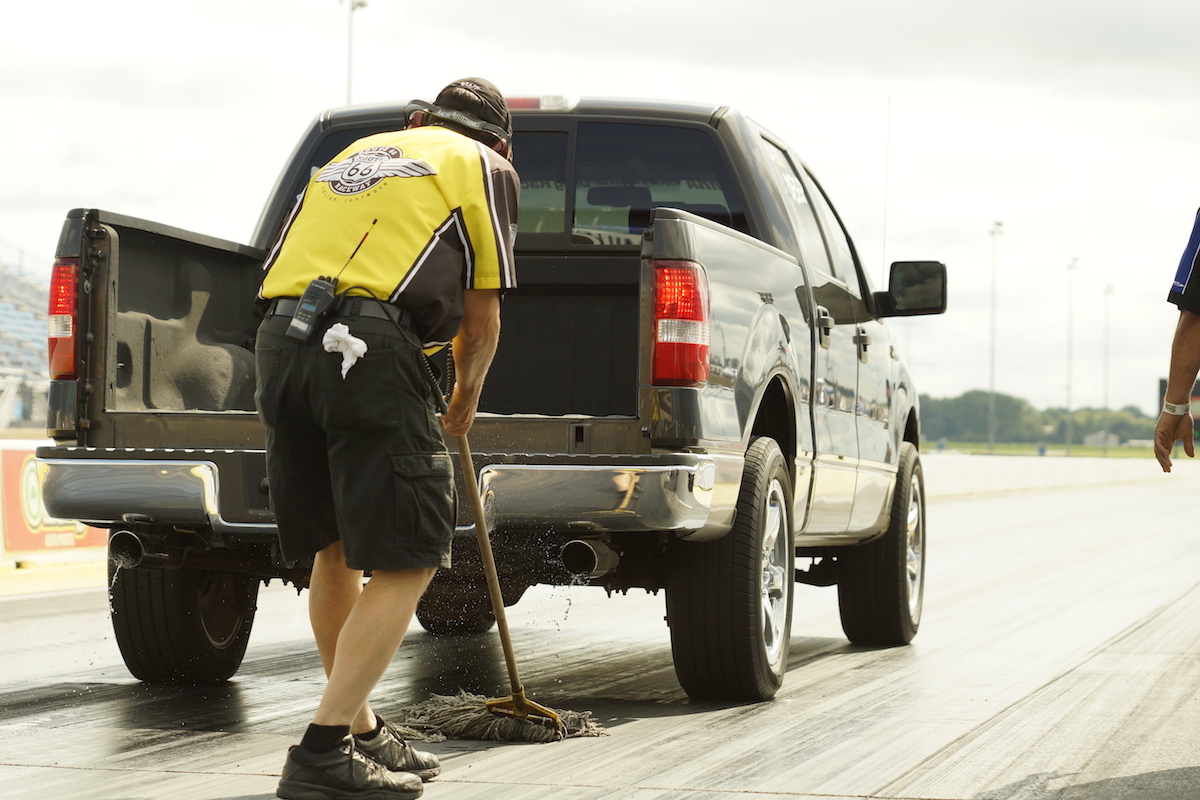 The NMCA/NMRA staff has been working hand in hand with the Route 66 Raceway staff to stay on top of the action throughout the weekend, and to ensure that the racing surface is in optimal condition at all times. The number of wheelies through yesterday afternoon and into the evening showed just how good it has been. 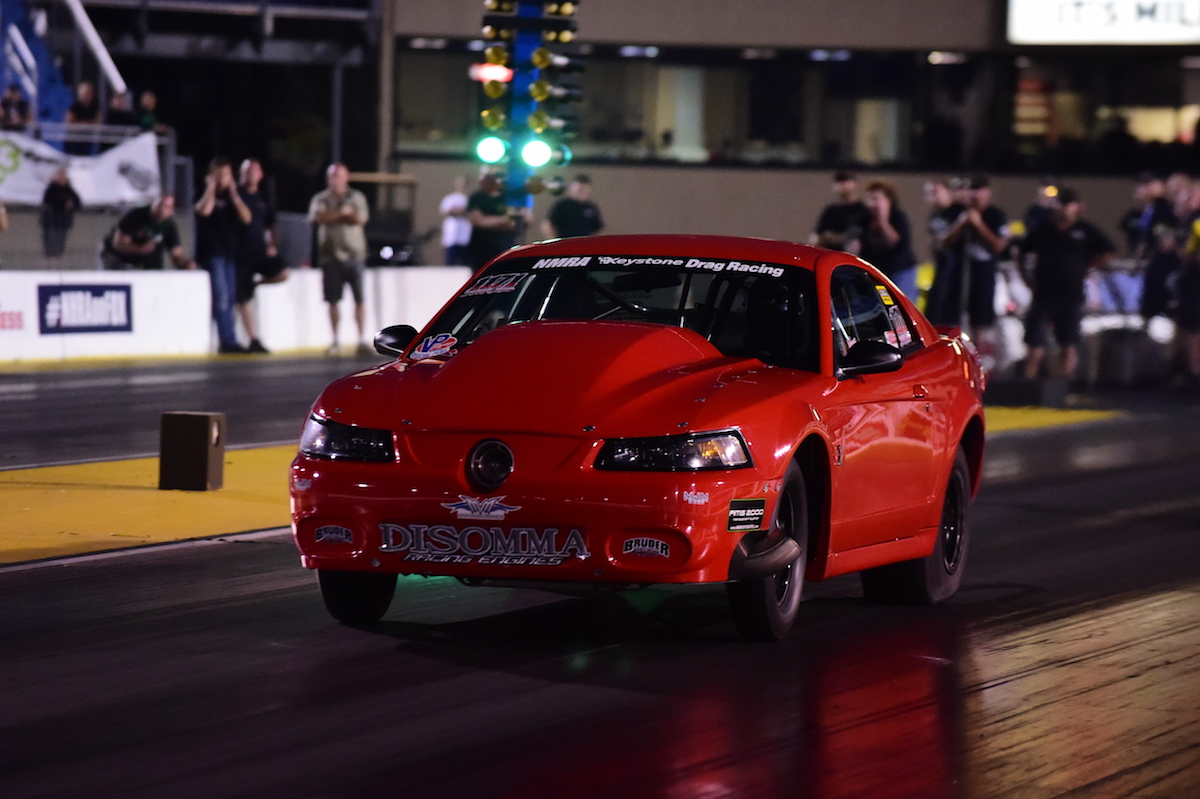 VP Racing Fuels Street Outlaw hot-shoe Manny Buginga had a handful of steering wheel in the first round of qualifying when his Mustang made a mad move toward the wall, but the legendary driver saved it, and he and his team promptly made chassis adjustments with help from Mark Menscer of Menscer Motorsports. He went on to qualify sixth with a 4.54, and then defeated Henry Schneider with a 4.50 in yesterday's first round of eliminations, and is ready for today's second round of eliminations. I went up to the lanes for the first round of eliminations with a tune that I knew would get me from A to B, and now we have something to work with for the second round of eliminations," said Buginga, who relies on a DiSomma Racing Engines-built 400 cubic-inch bullet fronted by a 98mm Precision turbo and has help in the tuning department from Nick and Rich Bruder. "I'm getting there, with a lot of help from my team." 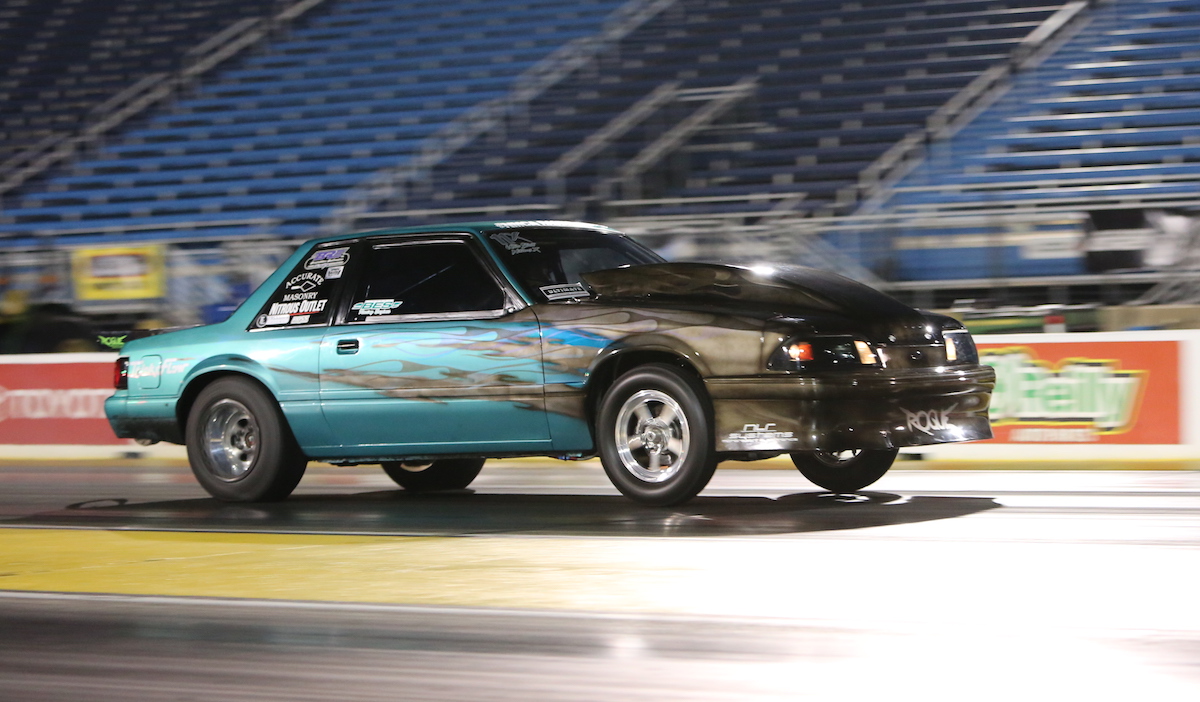 By all accounts, MX235 driver Shawn Pevlor of Cincinnati, Ohio is having a successful weekend, as he pushed his Mustang to a personal best of 4.72 to qualify in the top spot, and bettered that with an incredible 4.67 on his first round single. His stout combination consists of a BES-built 439 cubic-inch small-block Ford topped with Trick Flow High Ports, and extra jump comes from a nitrous system designed by Kevin Neal while an RPM Transmissions-built Turbo 400 puts all the power where it needs to be. "Before this race, Kevin did some things to the nitrous, Rodney Massengale at RPM Transmissions did some things to the transmission, and Mark Menscer went through my shocks and struts," said Pevlor, who's been working with NLR on the development of a nitrous controller. "There's more in the combination, but not in this weather. I'm still happy." 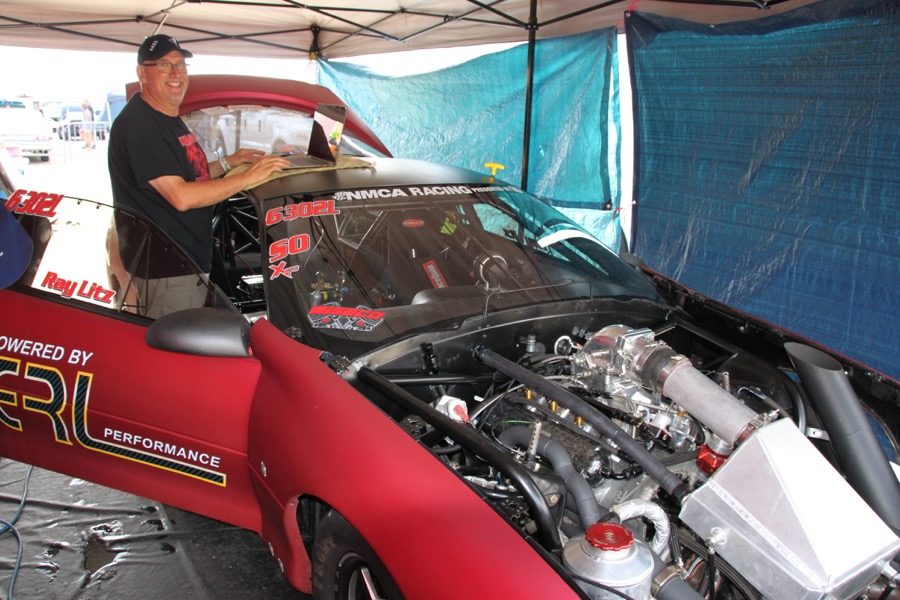 It may have taken Wiseco Street Outlaw driver Ray Litz two years to rework and rebuild his 98 Camaro after a wreck in the fall of 2014, but it was worth the wait, as he posted a personal best of 4.58 in last night's first round of eliminations. "I had a soft tune up in the car for the 60-foot, so there's more in store," said Litz, with a smile. For more information about the rebuild of his car, which features an ERL-built 400 cubic-inch LS engine topped with All Pro 12-4 heads and a Garrett turbo, click HERE 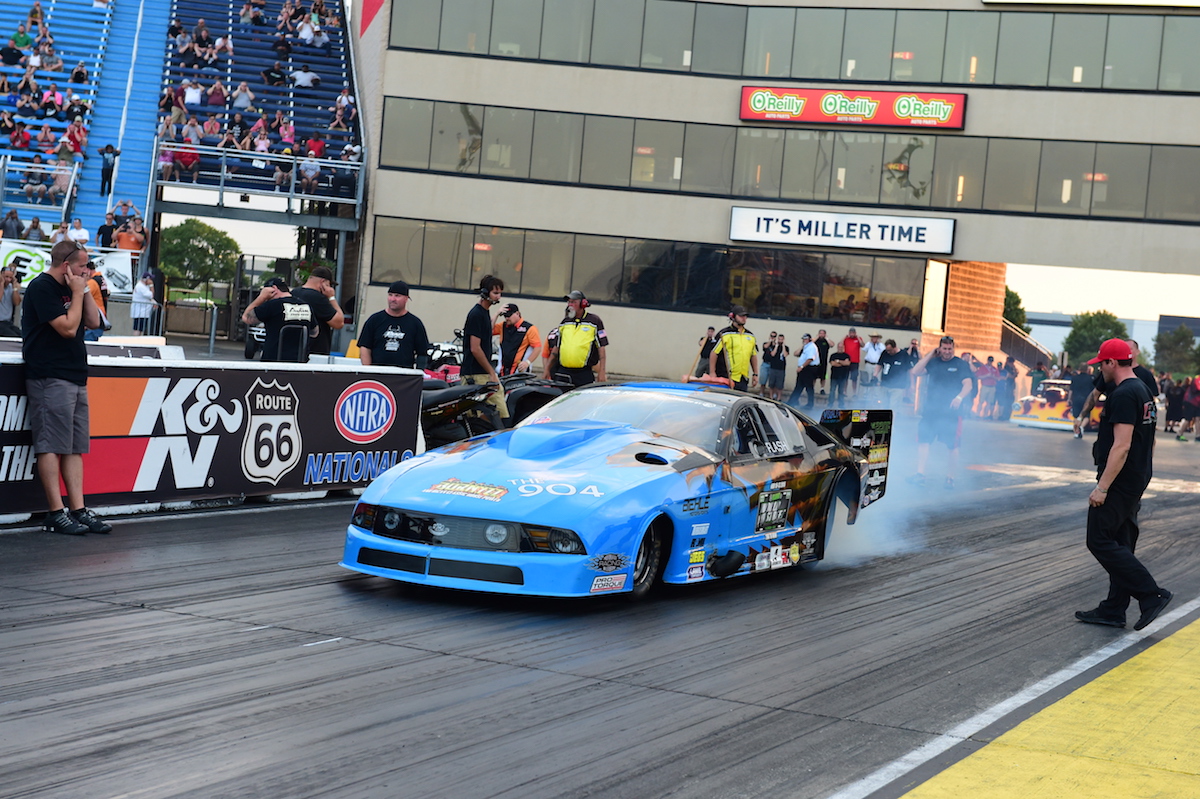 With absolutely no qualifying passes under his belt, Kevin Flash Fiscus scored an incredible win against number one qualifier Randy Adler in the first round of VP Racing Fuels Pro Mod eliminations. He planned to shut off early during the first qualifying pass just to gather some data, but the transbrake on his Fiscus/Klugger Racing Pro Mod Mustang didn't cooperate and the car rolled the beams as a result, rendering the run unusable. During the next qualifier, an oil line on one of the turbos came loose during the burnout and Fiscus had to shut it down. As the third round was canceled due to weather, Fiscus was allowed to run in eliminations and added to the ladder in the number fourteen spot. He went in to round one with a tune up from Thursday morning in the car, and everything came together. He held the lead over Adler right from the start and held on through to the finish. 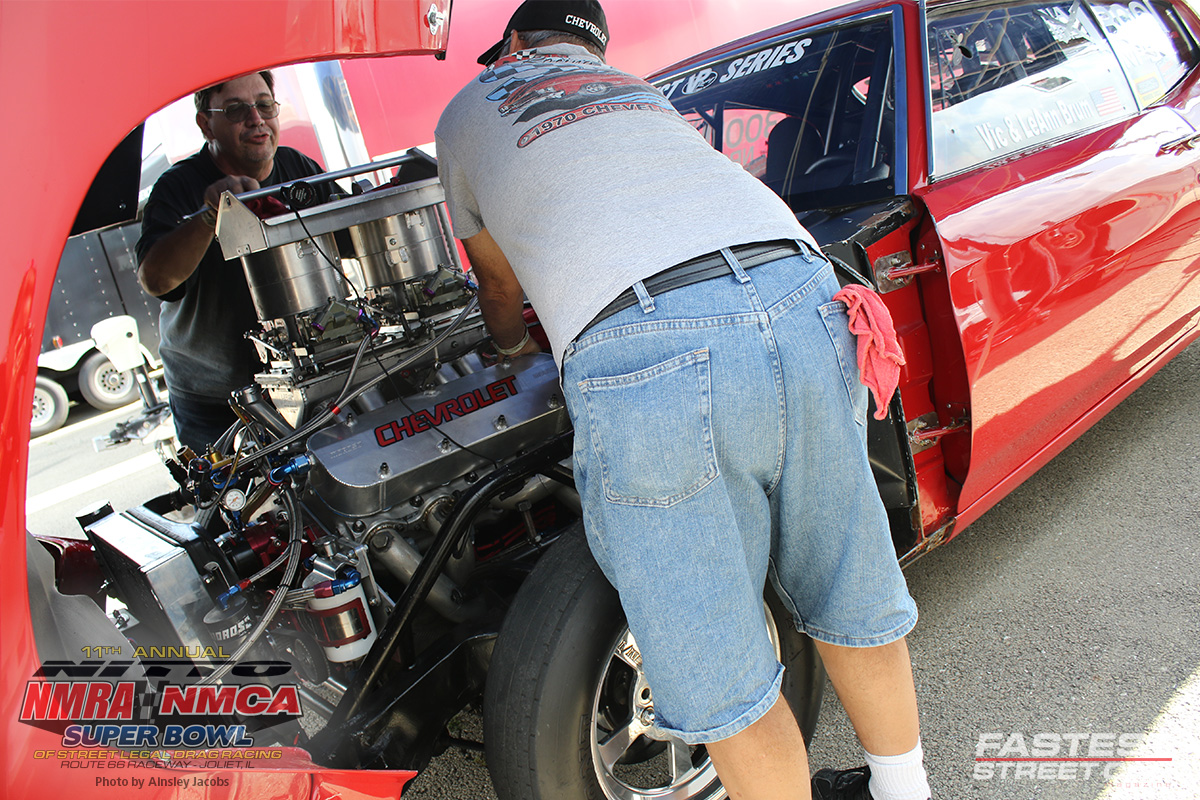 There's one major thing missing from APR Nitrous Pro Street racer Vic Brum's setup the nitrous! Brum, who took the NMCA WEST Lucas Oil N/A 10.5 championship in 2015, decided that NPS mostly fit his needs and figured he'd give it a shot even as an underdog. His 553 ci big block Chevy engine with dual Bob Book carburetors is significantly smaller than most of the other combinations in the class, but he's throwing everything and the kitchen sink at it and it's holding steady. His 70 Chevelle runs a Hughes Powerglide transmission and A1 torque converter, and he's joined by Crew Chief Steve Dillmore this weekend. Together, the two scored an upset win in the first round of eliminations and their plan for the next match is simply to go big or go home. 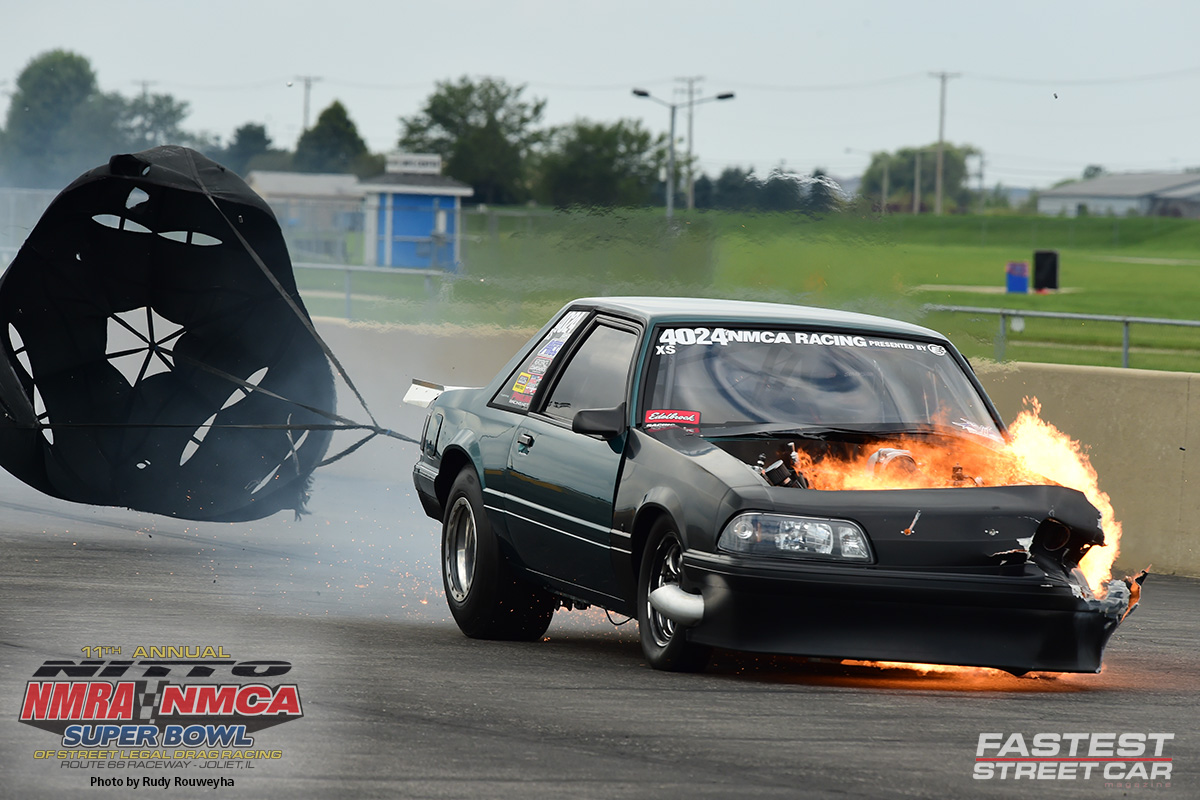 After a scare at the 15th Annual NMCA All-American Nationals at Indianapolis last month when some strong crosswinds took him for a wild ride at the top end of the track when he deployed his parachutes, Henry Hentry Lee ran into even more bad luck. On his second qualifying pass, just as he pulled the chutes, his Precision turbocharged and small block powered Ford Mustang bucked and kicked like a stubborn mule. As a result of its misbehavior, Lee wound up slamming into the wall at around 176 mph (on what would have been a new personal best run if it weren't for the horrific wreck that ended things abruptly). The car was almost immediately engulfed in a huge fireball, and, fortunately, Lee was able to escape the blaze. He suffered only minor bumps and bruises, and is already working on getting a new car ready for the next race. 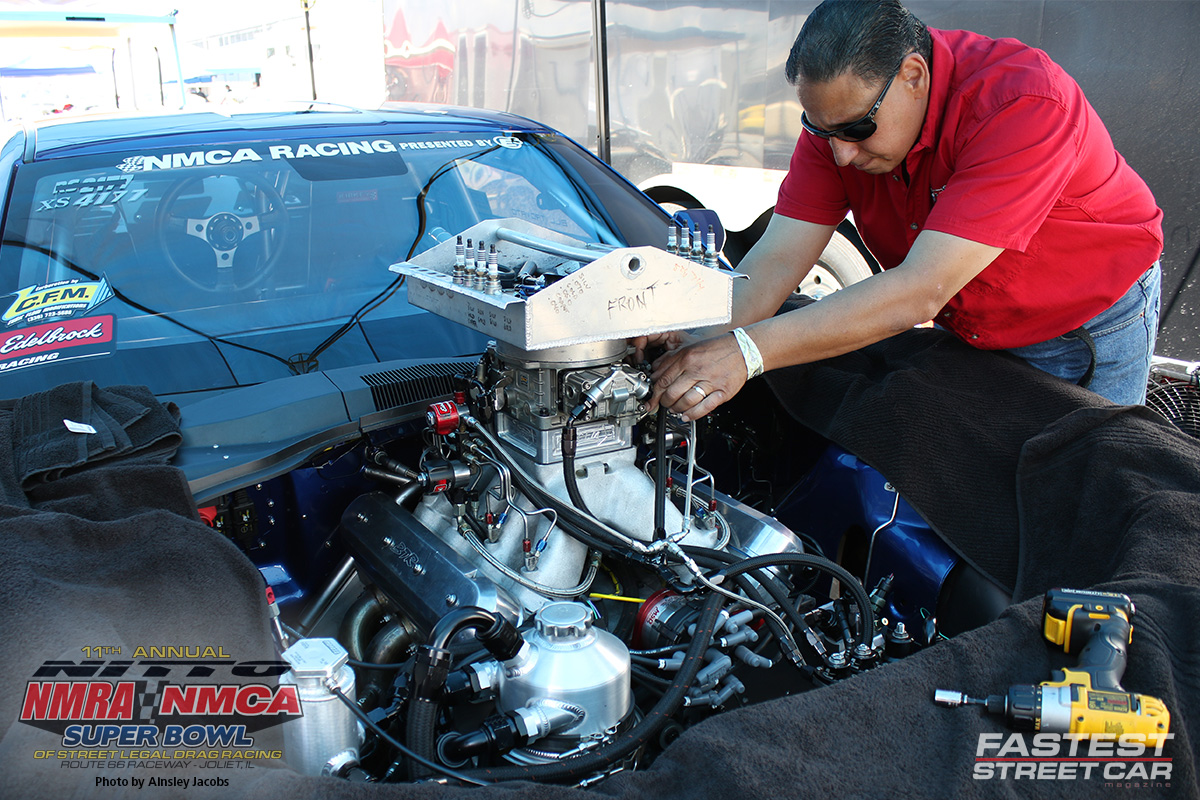 Edelbrock Xtreme Street standout Bill Trovato clicked off a new career best with his BTR-built 440 LS-powered 13 Camaro SS and made big strides towards catching the turbo cars in round one of eliminations. A 7.606 at 179.33 mph hit the product of making some suspension adjustments to his shocks and four-link, as well as collaborating with Marty Chance at Neal Chance Racing Converters. Testing at Summit Motorsports Park in Norwalk, Ohio prior to this weekend's event prompted Trovato to make the changes, and he's feeling confident in his car again. 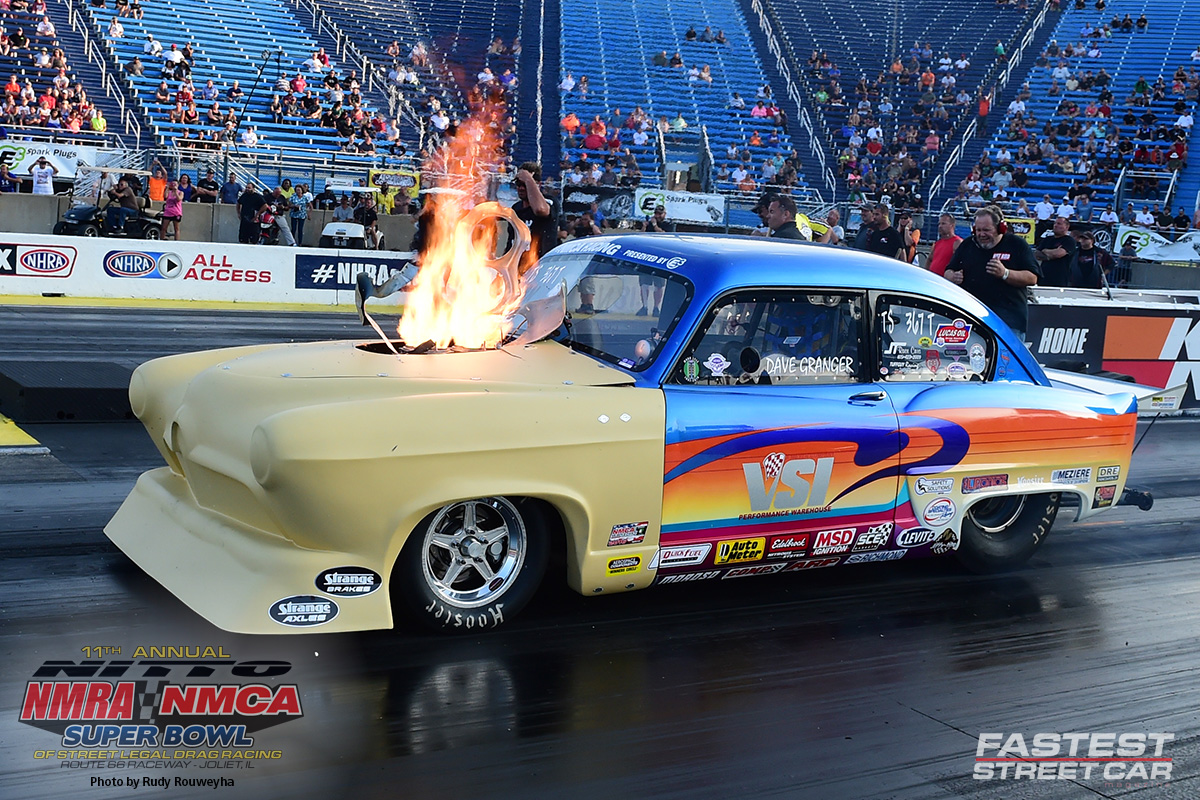 Dave Granger's unique 51 Henry J, which is co-owned by John Wiley, let out a massive nitrous burp during the first round of E3 Spark Plugs Top Sportsman eliminations. He suspects a stuck fuel pressure regulator was the culprit, and the fireball not only blew his intake manifold sky-high but it also took out a chunk of his Lexan windshield. Repairs will be made, but it'll be some time before the firewall-back original classic is back in fighting shape. 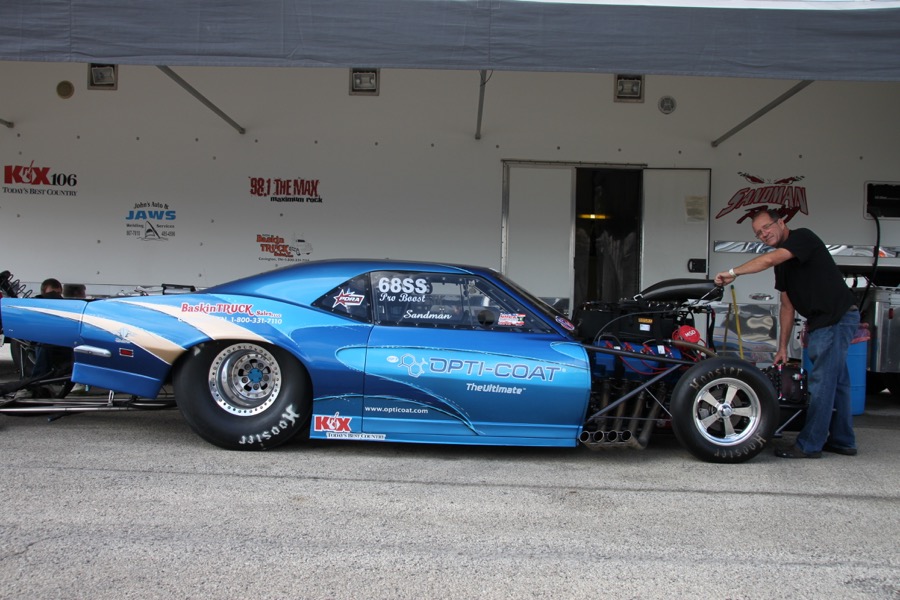 Tony Sandman Williams was a consistent contender in NMCA competition for years before he turned his focus to eighth-mile Pro Mod racing in other series across the country, but when NMCA designed the new Xtreme Pro Mod category specifically for the eighth-mile, he decided to join us more frequently. This weekend, he pushed his Tim McAmis-built 68 SS Camaro to a 4.03 to qualify fifth in the field of 15, won first and second rounds and is awaiting the third round. On duty in his machine is a supercharged 526 cubic-inch Hemi, and the longtime driver is currently in his pit area going over fuel and timing options. 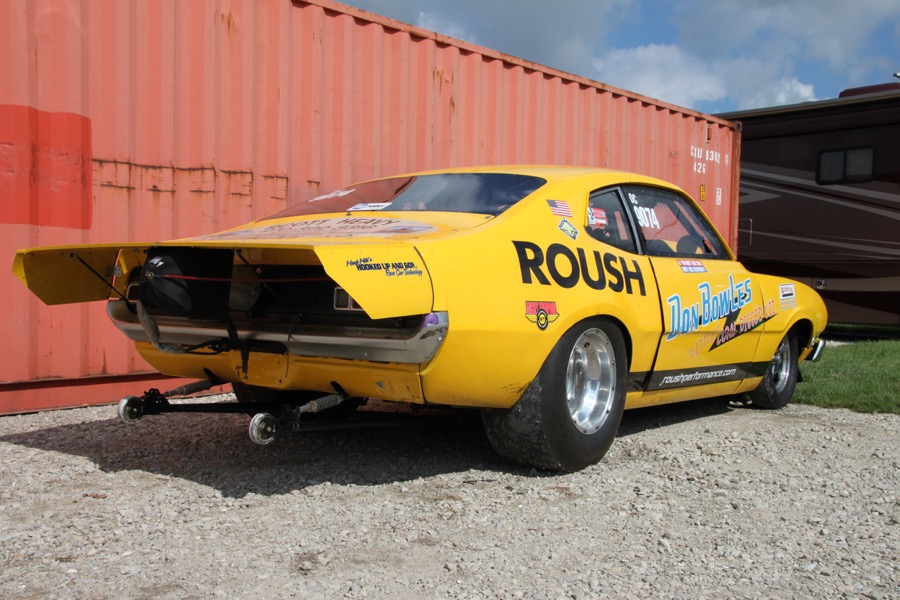 While his grandfather, Don Bowles, and father, Donnie Bowles, have been killing it in NMRA and NMCA competition for years, Donnie's 18-year-old son, Cameron, is new to NMRA Flex-A-Lite Open Comp and NMCA MagnaFuel Open Comp. Adding to the cool factor is the fact that he's in the driver's seat of his grandfather's well-known 72 Maverick, Little Coal Digger VII, which features a 358 cubic-inch small-block Ford built by Roush but freshened by Phillip Oakley and a Turbo 400. After making his NHRA competition licensing passes, he got his feet wet at the NMCA/NMRA race in Georgia in April, where he ran Bracket 2, and this weekend, he dove into NMRA Flex-A-Lite Open Comp, where he held his own by posting an .018 to qualify 13th in the field of 33, and advanced to the second round before bowing out of competition in the car which currently runs mid-nines. When we asked Cameron whether he was nervous considering he's following in the footsteps of two racing greats, he smiled and said No, because this is something I've been wanting to do my whole life, and now that I'm doing it, it feels great. 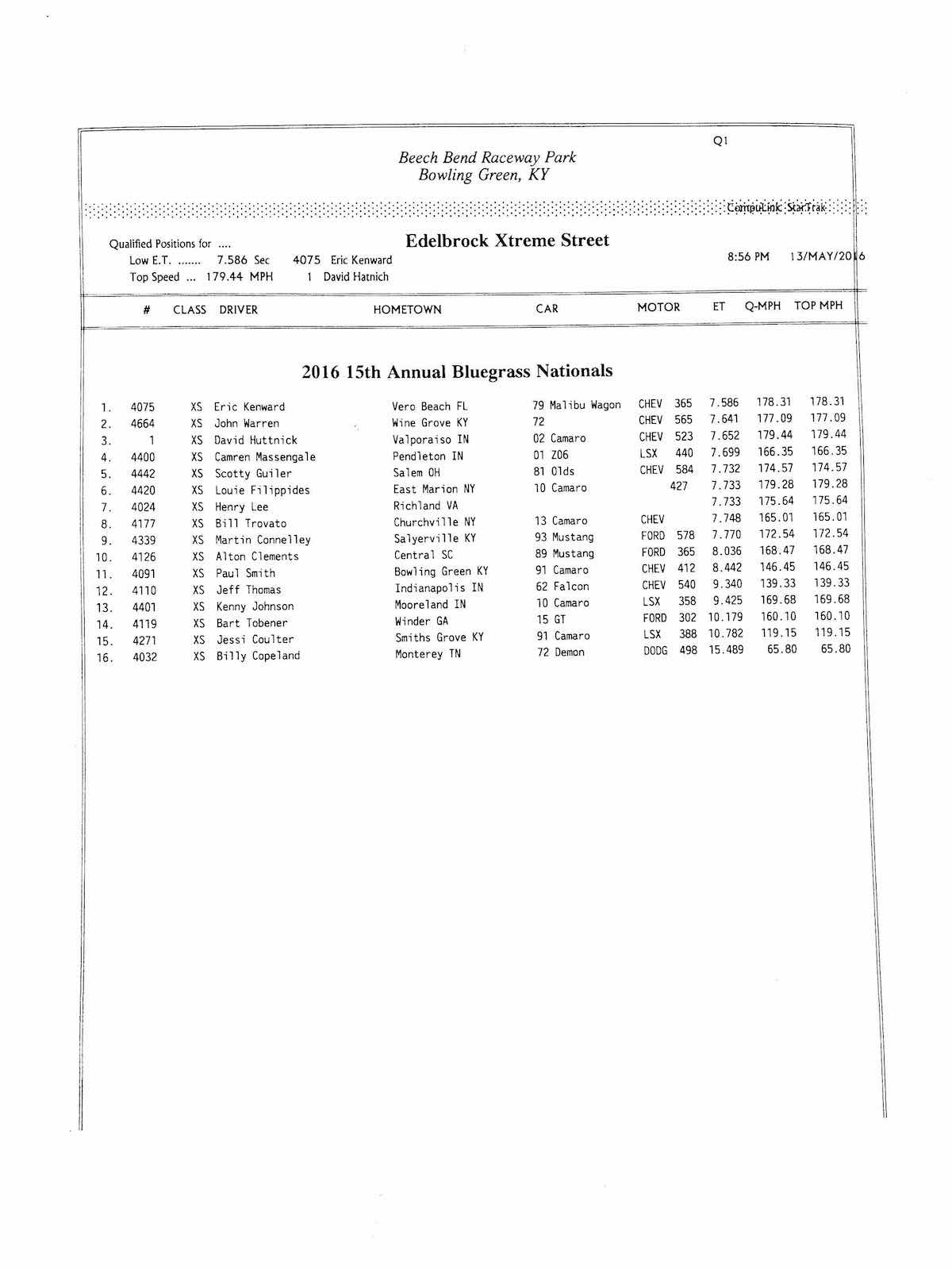 After feeling a vibration under his 2010 Camaro early in the weekend, Edelbrock Xtreme Street driver Louie Filippides discovered that the counterweight on his carbon fiber driveshaft had gone missing, so he swapped that driveshaft with a steel driveshaft. When he could still feel a vibration in the first round of eliminations, he took another look, and found that the yoke that slips into the transmission had beaten up the bushing because of the vibration, so he went back to the carbon fiber driveshaft after placing part of a hose clamp on'the spot where the counterweight was missing, and experienced no problems in the semifinal. Now, he awaits his final round match-up against current points leader Eric Kenward and his wild Malibu wagon. Eliminations are underway!!! Results updated throughout the day. get them <<<<HERE>>>>